Posted at 15:27h in Articles by WebAdmin
0 Likes

Musicians want the correct royalties to be paid but the proposed copyright amendments do not provide for this, writes Pri Hollis.

Music has been my first and last love. Over the past year the writing, recording, producing and approaching release of my first solo album has been a paramount occupation.

At every step, care has been firmly coupled with a dreamer’s reckless prognostications for what the future may bring. The high dues of study, time, creative identity and personal financial investment condense in moving towards the goal of creating original, independent art.

But during this challenging journey, the legal processes of the Copyright Amendment Bill have unfolded. SA’s copyright has thus far been regulated by legislation last reviewed comprehensively in 1978.

Creative industries welcomed revisions drafted in democratic freedom, the advancement of the digital age and the 2011 Copyright Review Commission’s valuable advice for negotiating this new landscape. However, artists across the board were confused and disappointed by the Copyright Amendment Bill and Performers’ Protection Amendment Bill introduced to Parliament. 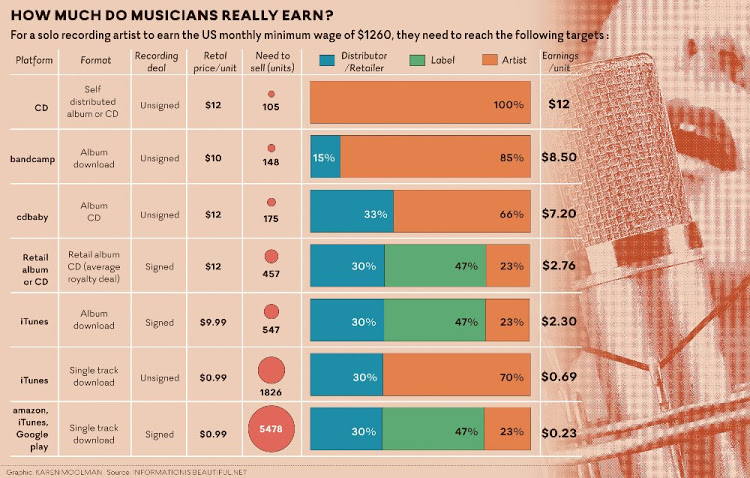 A particularly jarring and unprecedented inclusion in the bills is “user rights”, which means that unauthorised commercial use of a composition could not only be permissible but that infringing parties could be liable to share in licensing and royalty earnings.

Following protests by creative industries and the legal profession, Parliament’s portfolio committee on trade and industry fortunately realised that this was unacceptable.

The term “user rights” is used in tandem with “fair use”. In its present form, the bills allow the public to use copyrighted works in an open-ended and wholly unspecified way.

This lack of clarity may lead to a vast range of interpretations, which can only be defended in court and would have to rely on US case law to help make decisions. This puts independently funded musicians and internet protocol-based small business owners on the back foot, especially if they are in conflict with corporate infringers with large legal means. The onus would be on musicians to bring legal proceedings to establish that the unauthorised use of their work is not “fair”.

It is fantastic to share music that we enjoy and perhaps expresses a personal identity. Digital gateways have allowed musicians and their fans to extend their reach and interact with larger audiences than ever before. Many fans want to encourage the music they love and would like to see those who make it enjoy the benefits of global exposure.

However, if people who have not written, facilitated, produced or funded the work share in the profits, it will greatly affect those who are vested and invested in it. This dilution will affect the infrastructure that allows creative industries to create deals using business best practice to finance music and its creators. It will deter foreign investment, particularly in the distribution and publishing industries, which provide bread-and-butter funds through advances given in expectation of a musician’s work being profitable.

In 2017 the website Information is Beautiful compared the eight most popular music streaming services to determine how many plays it would take for a musician to earn the US minimum monthly wage of $1,472. It used the inputs of artist revenue per play, total users (paid and free) per million per platform, and reported losses by platforms and users.

YouTube, by far the largest streaming service, placed last. Regularly in opposition with the music industry over royalty fees, it paid unsigned artists $0.0006 per play — a decrease from the $0.0018 it paid in 2015 when identity checking services intended to protect content creators and their copyright became more prevalent.

Signed artists earn $0.0007 per stream on YouTube. For an unsigned artist to earn the minimum wage on the platform, they would need 2.4-million plays, compared with the 2.1-million required by signed artists.

Although the Google-owned company claims it offers fair royalties, there are alarming disparities. With a collective membership of more than 100-million subscribers, the paid platforms have rebated the music industry more than $5bn. It is a sharp contrast to YouTube’s dismaying contributions of about $500m from an expanding user base of more than 1-billion users.

This makes for a huge “value gap” — the devaluation of music due to user upload sites that fail to pay equitable, market-related licensing fees.

The owner of the music should choose the remuneration that is received. The bills do not address this. Musicians do not want to stop these platforms from allowing their music to be shared but they want the correct royalties paid for the use of content. Indeed, Google is owned by one of the most profitable companies in the world.

On YouTube the work of “first world” artists is deemed worthier of commercialisation through advertising than that of artists from elsewhere.

The bill feeds this ethos, this “value gap” of appraising art and artists through entitlements of users and a haphazard transfer of American “fair use” into SA’s copyright law.

The e-commerce enterprise Groupon, which offered vouchers on local goods and services, did not survive. “Free” can be synonymous with “cheap” and encourages consumers to value the medium on which it is delivered rather than what is consumed and needs to be supported. Consumers are attracted to the discount, not the product.

In the South African music industry, a large untapped market is left unprotected and without anyone to nurture it, despite calls to grow the economy. The high personal tolls and expenses of music education, equipment and gear — and, in my experience, the independent production and marketing costs of an album with personal copyright — will curtail the growth the industry needs.

Why pursue a music career if your efforts can be owned or used by anyone who copies or streams it? Often, the most dangerous pirates are those who claim legitimacy and have influence over governments.

This sets a precedent for the cultural recolonisation of South African creativity. If artists are not incentivised, our stories will not be told and others will tell theirs; others will write our history and zeitgeist; they will adopt our rich cultural heritage as their own.

If music is protected by legislation, its creators are encouraged to become members of a cultural economy, and SA’s art and identity will flourish.

These concerns have been raised. From submissions last August at hearings in Parliament, to the Creative Industries Imbizo in February, there have been cross-constituent gatherings of music and other organisations representing more than 30,000 South African artists.

A major concern of the alliance is that the amended bill was drafted without industry consultation or public participation with those it will most affect: the artists. It also does not take into account the valuable findings of the 2011 Copyright Review Commission report. And there has been no impact assessment on the bill.

Music has historically heralded a voice for social and political change; it is now time to do so for artists. Carol Dweck, in her work on psychology, speaks of “the power of yet” versus the “tyranny of now”.

It might appear protective of the artistic space to create distance from the intimidating intricacies of legalese, but this is now a necessary move.

We must venture over the bounds of formal music knowledge and the informal and universally recognised passionate dreams of every musician to apply our blind faith with open eyes for our rights as creatives. Art does not stop for politics, but politics should stop for art if it aims to represent it.